Join the family with our VaporBrothers Vaporizer Review

As I’m sure others have done as well, I have overlooked the Vaporbrothers time and time again due to the widespread exposure of low quality knock-off vaporizers that have stolen its design. In this review we’ll explore if the Vaporbrothers vaporizer is a timeless classic or an outdated has-been.

First and foremost, our Vaporbrothers vaporizer came from VaporWarehouse. The reason I’m pointing this out is because the VaporWarehouse Vaporbrothers comes bundled with the Padded Storage and Carry Case for free, other distributors versions do not. 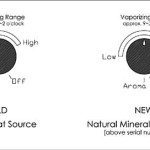 When I first pulled the Vaporbrothers out of the padded case I was surprised by how small it was. The housing is a smooth wood that comes in either a light (natural) or dark (coffee) finish. The front of the Vaporbrothers is open at the top to expose the recessed heating connector, the lower section has a dial that functions as an on/off switch as well as the temperature selector. The left side of the vaporizer (if you’re looking at it from the front) has the Vaporbrothers logo etched in the bottom left-hand corner. If your Vaporbrothers doesn’t have the etched logo, chances are it isn’t a genuine Vaporbrothers product. The rear of the vaporizer has an opening for the non-detachable power cord. The underside is a clear plastic panel labeled with the necessary safety compliance information and serial number. Four rubber feet located on the bottom serve to lift the unit off the surface of the table and for better air circulation.

The EZ Change hands free whip for the Vaporbrothers is comprised of: 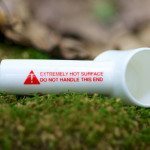 Not much I can say about this, the ceramic oil diffuser works well. Heed the warning located on the stem of the diffuser (which fits over the heating element), even on the lowest setting it becomes extremely hot and should not be touched. The bulb (front cup) portion of the diffuser stays cool enough to touch if you need to remove it while the Vaporbrothers is still operating.

Included with the above is:

The Vaporbrothers is a solid desktop vaporizer. It feels well crafted and doesn’t have any wiggle or play that can normally be found in lower quality wooden vaporizers. It takes about five minutes for the vaporizer to reach its set temperature from a cold start, which is fairly quick by some tabletop standards.

I find it difficult to go into extreme detail about the operation and components of the Vaporbrothers because its design is centered around doing on thing, and it does it well. Instead, I’ll put my thoughts and experiences in an itemized list:

Why should you care?

While writing about my experiences, I began to question why someone reading the review would be interested in a vaporizer that can be summarized with the phrase “Works as advertised.” Other tabletop vaporizers on the market today feature bells and whistles, pulleys and levers, and every other fathomable promise under the sun. Why not really cash in and buy a vaporizer with an EZ Bake Oven built in?

Vaporbrothers (the company, not the vaporizer) has been around long enough to know what they can and cannot do well. They honed in on their strengths and produced a safe, high quality, inexpensive tabletop vaporizer that is covered by a  limited lifetime warranty. A warranty which is backed by a decade of sales and data, they aren’t relying on “holding their finger in the breeze”.

I’ll leave you with a quote from the Vaporbrothers website back in 2001:

“Vaporbrothers, Inc. is a small manufacturing start-up based in Venice, CA.  Inspiration for the product came from artist and tinkerer Robert Vaporman in the spring of 1999.  Inventor Linus took it from there and presented his prototypes to friends and extended family, receiving enough support to continue building.  Linus’ first run of vaporizers found almost instant favor among all types of people, including singers, artists, industry professionals, and normal people.  Dan Vapor joined Vapor Brothers in July 2000 as Chief Operating Officer and has facilitated the construction of 1000 vaporizers.  He brings to Vaporbrothers better building methods, new development, and quality control.

Our vaporizer will be mass produced someday, but will look very different than it does today.   We still hand build our vaporizers; hence the simple appearance and utilitarian nature.  We are only known by word of mouth and this website.”

The Vaporbrothers vaporizer looks the same today as it did when they launched their updated housing design in 2001. While the internal components have since been updated, the core premise remains the same.

I’ve used the (same) VB for over 10 years now and I can’t imagine anything working better. Or, maybe I should say I can’t imagine *wanting* something that works better LOL. I’m contemplating new accessories, and the cooler VB have come up with is on your short list. Keep up the great work VBs!