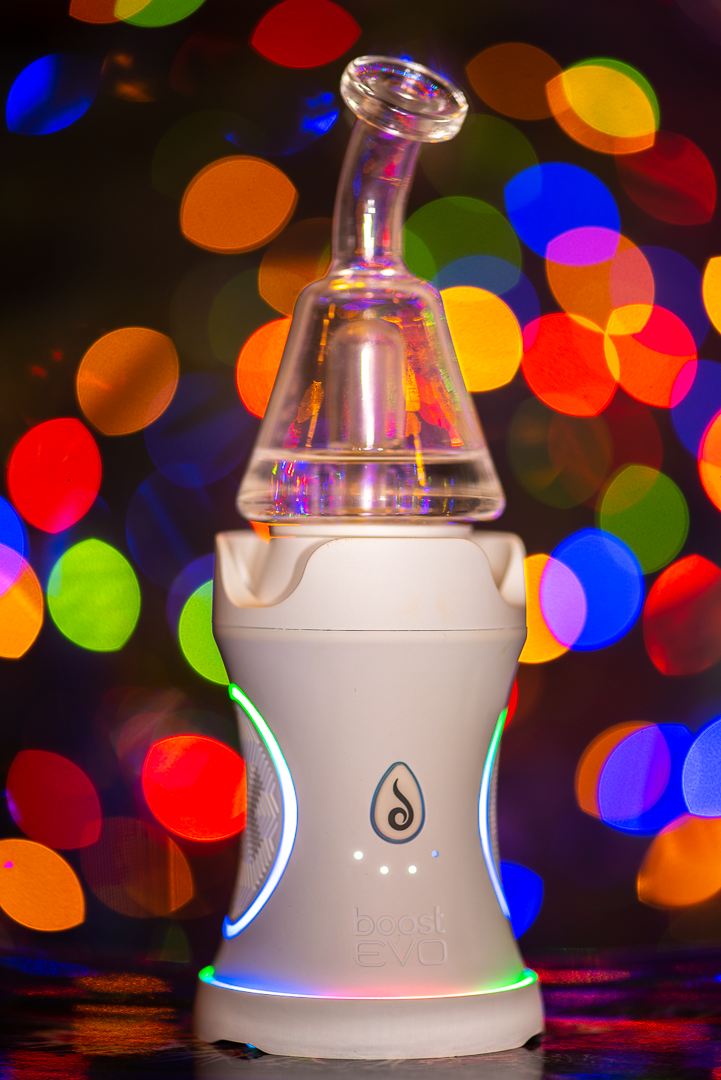 It’s been four years since the release of the original Dr. Dabber Boost and the folks at Dr. Dabber have been busy working on their portable, desktop-replacement style concentrate vapes. We now have the induction powered Dr. Dabber Switch, and the most recently released successor to the Boost the Dr. Dabber Boost EVO.

the middle child in the Dr. Dabber lineup

Sized to fall between the traditional – pocketable –  pen-style vaporizer, such as the Stella pen, and the larger around-the-house style portable e-rig the Switch. The Boost EVO is the middle child in the Dr. Dabber lineup.

The Boost EVO has a vertical design that sandwiches a heating chamber (from here on I’ll be referring to this as the atomizer) between the base and the glass bubbler.

Both the atomizer and glass bubbler attach to the Boost EVO with quick-connect magnetic fittings, clever use of magnets remains Dr. Dabber’s signature design element.

Located on the quick-connect ring is the push-button carb. I had to seek clarification from Dr. Dabber because I was confused at what the default intended use of the carb was. I was told ‘The carb is an airflow valve that was intended so that the user could manipulate their airflow while taking their hit. If you don’t touch the carb at all, you get a restricted hit with little airflow, but on the other end, when you press the button, it creates a huge shotgun effect. It gives the user control over their experience.’

So, here are the three carb options I’ve discovered:

I alternate between these three moves pretty much every hit. An example: I’ll start a draw with the carb covered (options 2) and then after a few seconds begin to lift my finger off the carb for half a second at a time, alternating between Covered and Untouched. Then as I’m finishing the hit off I’ll press on the carb for a second or two then release it.

Arguably the most important feature is the Atomizer. A viable e-rig needs to present a user experience closer to using a rig than to a pen. The Boost EVO sports an easy to replace atomizer with a quartz bucket. Hits wise, the quartz bucket is an excellent choice, it has no taste of its own and is easy to keep clean. The entire bucket is sealed so it doesn’t leak. It does seem like my oil collects around the outside edge of the dish after hits, but never to the point where I feel like anything is wasted. All the accumulated oil vapes off on a second run.

The main body of the Boost EVO is shaped like an oversized rook from a chess set. There are two textured pads on either side of the body to help provide grip, they do a good job giving some tactile feel to the surface. Each pad is surrounded by multicolor LEDs than can display different patterns. There is a third ring of multicolor LEDs around the base of the body.

The entire body is covered in a soft touch material that makes it feel… soft, while also being a hard surface. The device has one button, it’s on the front and it’s in the middle.

I won’t bore you with the details here, but the one button does everything from changing the light configurations to changing the temperature and hit duration.

It’s not hard to remember how many button presses does what and using the Boost EVO is intuitive after about a week of ownership. There are four lights underneath the button, they represent current battery level. I get about 6ish big double-length hits per light. The Boost EVO will warn you when you hit critical battery levels by flashing the current set temperature before it begins heating up.

There are six available temperature presets that range from 550F – 750F. It takes about 9 seconds to heat up to the lowest temperature setting from a cold start. Then the Boost EVO heats for 20 seconds (default) or 40 seconds (party mode). Afterwards it goes back into standby mode. If you don’t interact with the Boost EVO for 15 minutes it automatically shuts off to preserve battery life. On the subject of battery life, I get about 50 hits out of a full charge. I let my Boost EVO time-out pretty much every time I use it and I suspect that is costing me battery life that would otherwise be a few extra hits.

Hits from the Boost EVO are tasty and high quality, the quartz bucket is easy to keep clean and if you keep up with regular cleaning it will never have a taste. I prefer the lowest temperature setting and two hits back to back, it seems like the Boost EVO does a great job regulating power to the atomizer and keeping the chamber a consistent temperature.

If you’re going to have a portable device with glass components, having a protective case for it is handy. Luckily the Boost EVO comes packaged in its own reusable protective travel case. The case is purpose built and each individual component has a snug fit inside its cutout. It also has a very small compartment that can be used to store the charging cable or some other small accessories. There is a small latch on the side to keep the case from accidently opening.

The travel case seems very beefy and built to last.

e-Rigs have muscled into the space that traditional torch rigs and e-nail rigs used to occupy. The Boost EVO has earned a spot in my routine and takes some guesswork out of getting consistent low-temp hits. With regular maintenance the atomizer looks and runs like new after a month of use. I’d recommend the Dr. Dabber Boost EVO for anyone looking to bring a modern touch to their concentrate vaping experience.

The Boost EVO is available for purchase directly from Dr. Dabber for $329 at the time of this review.

Great review, I just ordered mine and I can’t wait for it to get here! I have the Switch as well, which do you like better?

That’s a tricky question. I like the Boost EVO for its size and shape, it’s very portable. I like the Switch for its funky lights (yes even more than the lights on the EVO) and induction heating.

I feel like I would reach for the Switch at home if I had the two side by side, but I haven’t had that opportunity yet. Time will tell.