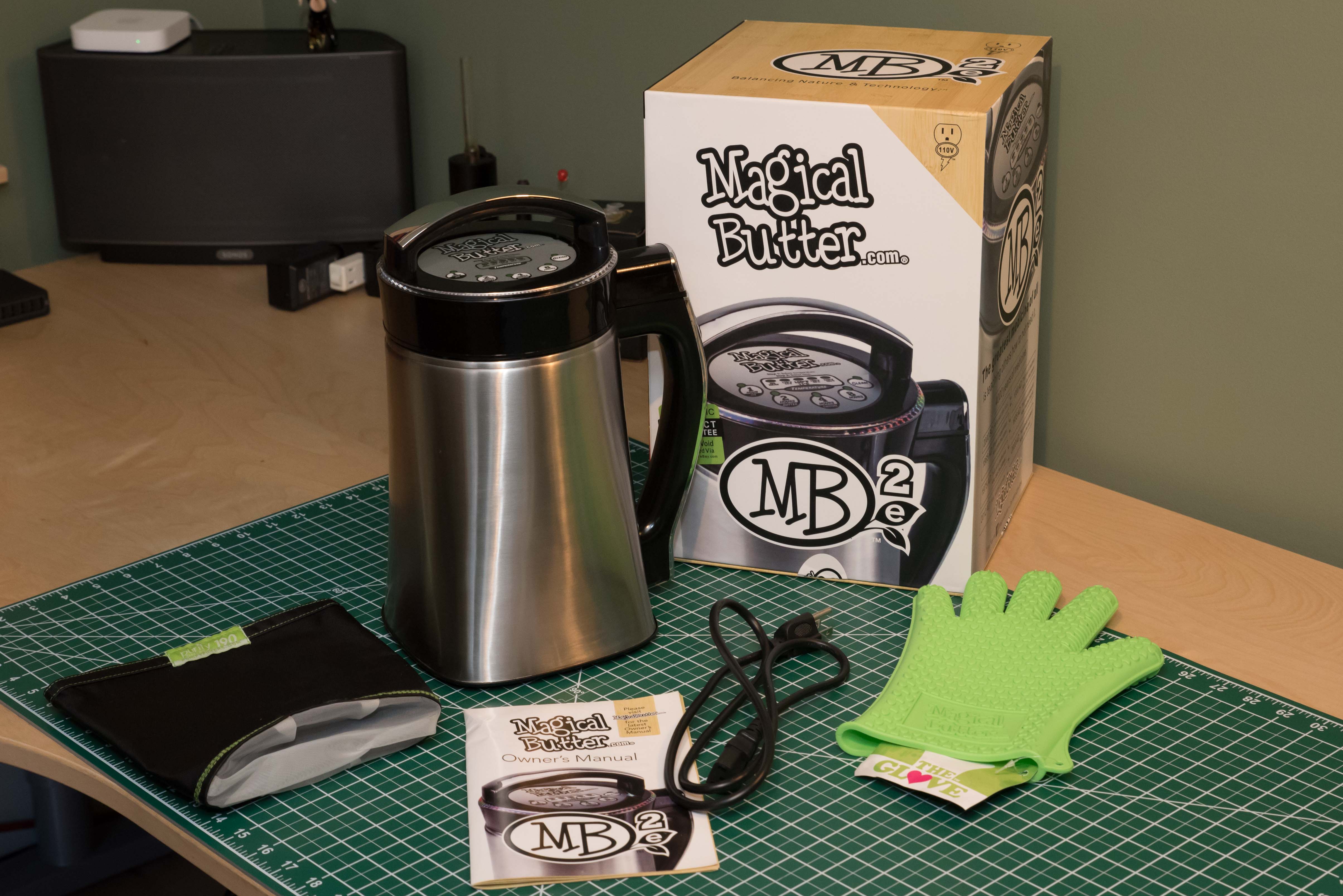 I’ve been salivating over this thing for over a year now.

Not that I’ve had a particular urge to make my own brand of herb infused butter.

I just hate going through the whole process, and an all-in-one solution really appeals to me.

Today I am working with EarthBalance Buttery Spread, I will call it butter.

What is the Magical Butter MB2e?

The MagicalButter is an immersion blender. You can also think of it as an upside down blender.

Upside down blenders don’t strike me as very magical.

This is an upside down blender with a brain, some probes, and a heated container. This is a magical blender.

MagicalButter is an all-in-one kit to get you making herb infused butter (your choice of herbs).

The MagicalButter MB2e seems to be packed well. The box is spiffy.

I say it seems to be packed well because I had a small tab break off of my unit in transit, but it doesn’t affect the overall experience. Keep an eye out, nothing else was damaged or scuffed.

On a brighter note it’s nice to see so much packaged with the unit in the box. Included are a silicone glove (don’t burn yourself) and a 90 micron reusable filter bag.

Both of these accessories are high quality and make the process of making the butter a snap. Well done including the necessary accessories MagicalButter Inc. I’ve made messes or have gotten very frustrated making herb butter in the past.

Not this time! I had everything ready to go, no need to improvise, no mess.

The Ins and Outs of my using the MagicalButter

These are my thoughts and notes after successfully making two cups of herb infused EarthBalance Buttery Spread:

But, I was in the other room. Did it beep? It’s not doing anything, it’s just sitting there throwing a little light show. Maybe it’s done. I shouldn’t touch it, I should let it do its job. It feels like it’s been two hours, maybe even more. *Beep* Ah, there it is. It’s done. Next time I’m setting a timer on my phone.

[themify_box style=”light-yellow rounded” ]Tip: The overflow sensor is the short black one with the metal tip.[/themify_box]

MagicalButter makes a great product. When it’s time for me to make some butter, MB2e is MVP in my household.

I’m left with an overall feeling of satisfaction that I got the results I was looking for, all with less effort invested on my part.

To check out more info, or see the hard specs (they have a 220v version) check out MagicalButter.com

What do you guys think?

I’d love to hear suggestions and comments on how I fared with the MagicalButter. Comments also let me know the kind of info you guys value, so I can include it in future reviews.

I love my Magical Butter Machine, best money I’ve spent all year, strongest edibles I’ve ever gotten! Set it and forget it, I prefer using coconut oil then using that in any recipe that calls for butter… it holds more thc and is much healthier, cant tell the difference when cooking with it

I need more info on this decarboxylation, is there a special setting on the new MB2e? This means a great deal in activating your product for tinctures…please reply
Thanks
Dan

The highest temperature setting on the MB2e (220F) is capable of decarbing your herbs. I ran my butter and herbs for one hour at 220F and then for two hours at 160F. This was enough to get the job done and have perfectly activated herb butter.

How this relates to tincture? I’d say its worth trying as long as you’re comfortable cooking your tincture for 220F for one hour first.

Let me know how this works out for you so I can pass on your tips!

Did anyone get any info on this? The manual seems to direct you to decarb in an oven?

The manual is vague.

You can choose to decarb in the MB2e by running it for an hour at 220F (with liquid and herb inside), before you run it for its full cycle.

Otherwise, decarb in the oven if you prefer. The results won’t be the same, but they’re close enough for me to use the MB2e to decarb. Decarbing in the MB2e makes everything mushier and more of chore to strain.