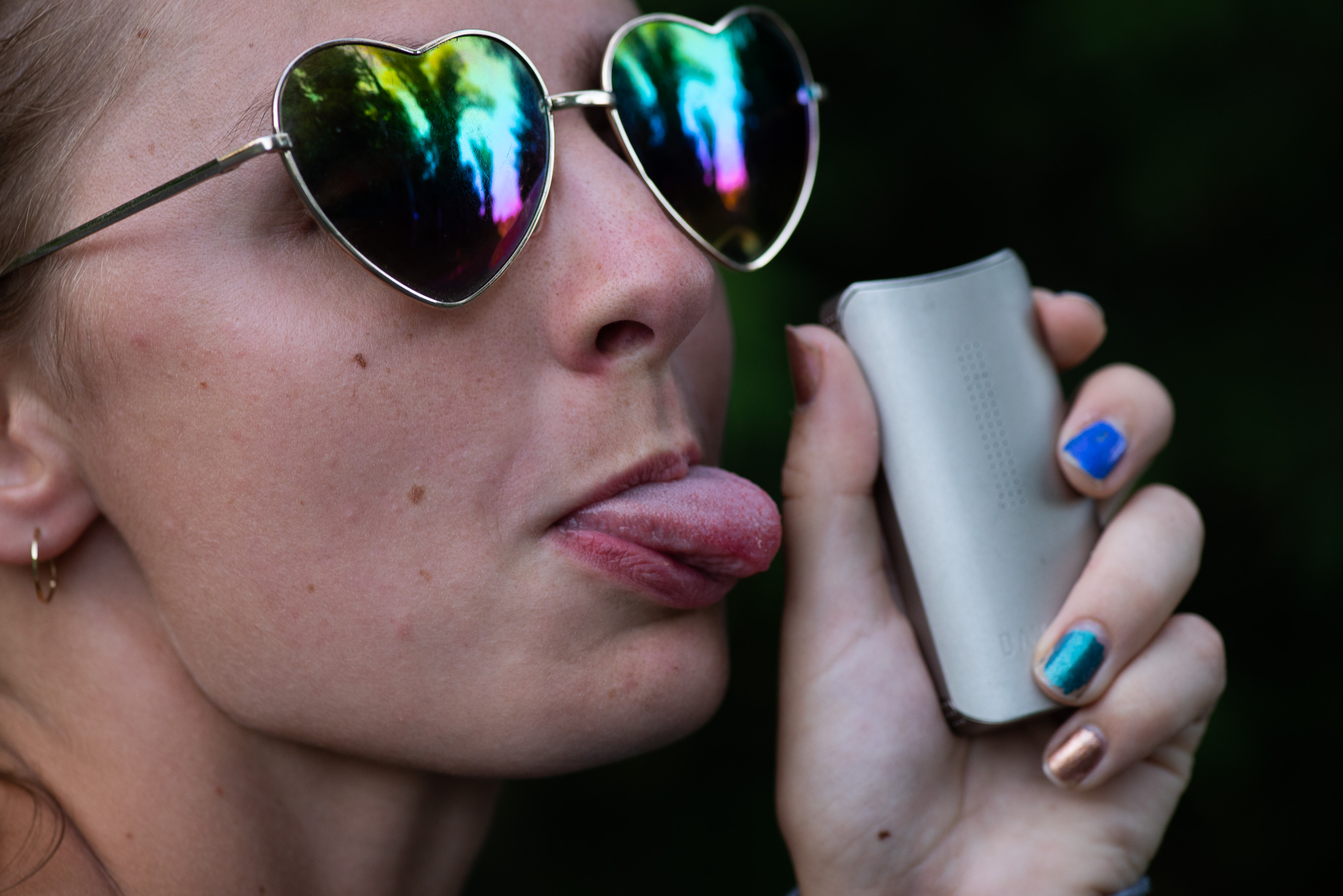 Today we’re going to be looking at the 2016 DaVinci IQ portable vaporizer. The IQ is an impressive leap forward from DaVinci’s previous generation vaporizer, the Ascent. The IQ is smaller, heats up faster, is easier to clean and maintain, and most importantly it doesn’t come in a faux woodgrain color variation.

The first time I handled the IQ immediately I was surprised by its small size and compactness. The IQ earns its highest marks for portability and pocketability. This is an impressively compact vaporizer when you consider how many useful features are crammed into it. It’s a dense little nugget of vaporizer too, when I hold this thing in my hand I can feel the heft, there is no space wasted inside the IQ.

The IQ is well built, the folks at DaVinci have improved on the build quality of their vapes generation after generation, and that experience is paying off. The outside shell is anodized aluminum: the process of anodizing the aluminum hardens it making it more durable, and it can also be used to add color to the aluminum at the same time. I’ve been using this IQ for over a year and the hinges are still as smooth as they were on the first day. It’s difficult to find any signs of regular wear on the IQ outside of discoloration in the herb chamber from heavy use.

The herb oven in the IQ is pretty large for a portable vape, it holds about 3/10 of a gram of ground up herb. You can fit a bit more than that if you pack it down a bit, but if you plan on putting less than 3/10 of a gram it’s recommended to get the IQ Glass Spacers to pack the herb down. Without the spacer herbs packed loose in the oven don’t vape evenly.  Heatup time from a cold start is around 50 – 60 seconds depending on your set temp. Capping off the oven is a ceramic zirconia orb called the Pearl. This tamps everything down as you’re closing the oven and closes it off once the lid is fully shut.

The Flavor Chamber is a removable part of the IQ vapor path. It’s made from the same ceramic zirconia material used in the Pearl near the oven and mouthpeices. You can open the flavor chamber up and fill it with un-vaped herb to freshen the flavor of your vapor. This dries the herbs in the flavor chamber out, but doesn’t vape them.

The display on the IQ is absolutely the coolest. The front of the IQ is a dot-matrix display comprised of 51 dots in a 3 x 17 grid. These 51 dots dance around to give you updates on battery life, current temperature, boost status, standby status, current smart path and a few other statuses. The display is completely flush against the body of the IQ. It’s well crafted, a subtle addition that adds to the premium feel of the IQ.

The three buttons on the side of the IQ light up when pressed. The three buttons are power/select, up, and down. Tapping the power button five times turns the IQ on or off. The buttons have a satisfying click to them, the click is both audible and tactile.

The IQ doesn’t look like a vape until you pull it out and start puffing on it. Once it’s going, the IQ smells like whatever herbs you’re vaping in it. It’s a lot more discreet than smoking, but it’s hard to be discreet with a hot IQ in your hand.

The IQ produces thick vapor quickly. The first hit of a freshly packed oven in the IQ will always have a strong flavor, usually very similar to the smell of the herbs. After a few draws the flavor fades. I’m usually getting strong vapor long after the unique flavor profile of the herbs has cooked off. Thanks to the glass-lined ceramic oven and ceramic zirconia flavor chamber the flavor from the first few draws stands out as some of the best among portable conduction vaporizers.

Where the IQ could improve, and the weakness of conduction vaporizers, in general, is the length of that tasty vapor period. The period of time before the taste of the herbs is vaped away, but there is still life left in the session. The IQ has a few good tasty draws, compared to convection, or convection hybrid vaporizer which could have twice the amount of tasty draws. That may sound ambiguous because it not only depends on the vaporizer but also the quality of the herbs.

The final verdict on taste and vapor quality is positive. The IQ gets the flavor from the herbs into the vapor. Pack the oven full and the vapor lasts for a while, the IQ will be producing vapor for the entire 10 minute Smart Path session.

The DaVinci app on iOS works well for setting up the smart paths and picking one out. It’s useful for checking out usage stats on your IQ, such as how many hours it has under its belt. Unfortunately, it’s not possible to check the battery status using the app.

Smart paths are preset temperature layouts that will gradually adjust the set temperature of the IQ from the beginning of your session to the end. This means you can start a 10-minute long session at 350F and end at 420F and hit every single point in between along the way.

You can have multiple smart paths saved and you can custom tailor them for different effects. For example a smart path that starts at a low temperature and then ramps up to ~370 towards the end of the session may be light and flavorful but won’t leave you feeling heavy and sedated like a session ending at 420F or 430F would.

You can pick and choose between the pre-set smart paths directly from the DaVinci IQ itself, but actually setting up the smart paths requires the use of an Android or iOS smartphone paired with the IQ.

The IQ lasts for a bit over an hour of constant use. I average about 65 minutes or so of use from a single charge. That breaks down into six longish sessions with the IQ per charge.

Charging the IQ takes about 3 hours. The alternative to charging the battery inside the IQ is to pick up a spare battery and external battery charger and swap batteries out. My external charger takes about an hour and a half to charge a battery to full and can charge four batteries at once.

Cleaning the IQ is designed to be easy. The mouthpiece and flavor chamber pop out and can be soaked in alcohol. To clean the oven I brush it out and wipe it down with an alcohol wipe. Unfortunately, there is one spot between the oven and the flavor chamber where resin and tiny bits of herb collect that is pretty hard to get to. I get down into this spot with a paper clip and alcohol wipe and with a bit of wiggling I can get it cleaned up, but who knows how much accumulated buildup is inside the area I cant reach between the flavor chamber opening and the oven. I use the IQ regularly, clean and maintain it every so often, fuss about that hard to get to spot once in a while, and it hasn’t caused me any issues yet.

The flat mouthpiece on the other hand.

If you don’t regularly clean the flat mouthpiece it will begin to get sticky on top, which does cause me issues with a side effect of giving you sticky lips. You can either pull the mouthpiece out and soak it in alcohol for a brief period, or wipe it down with an alcohol wipe. Giving it a thorough cleaning is the best option, but the alcohol wipe can be a quick short term fix for the sticky lips.

The IQ passes all my tests, I enjoy using it and carrying it with me when I’m out and about. The vapor is as strong as any other portable vape I hold in high regards, but the taste is underwhelming. Having a removable battery means very little downtime when the IQ is being shared with a group, or just being used for back to back sessions.

The DaVinci IQ sells for $274.99 and can be purchased directly from DaVinci 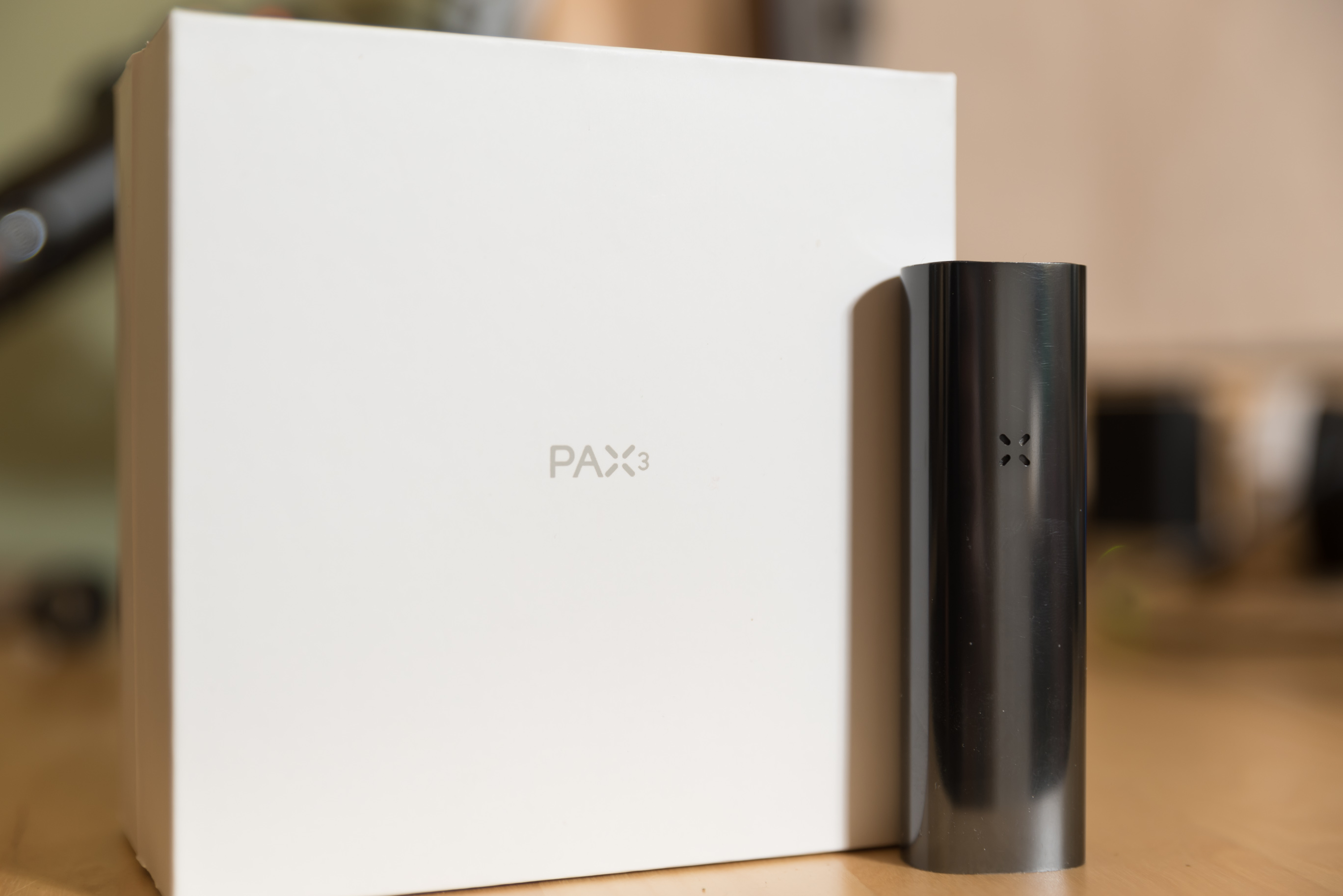 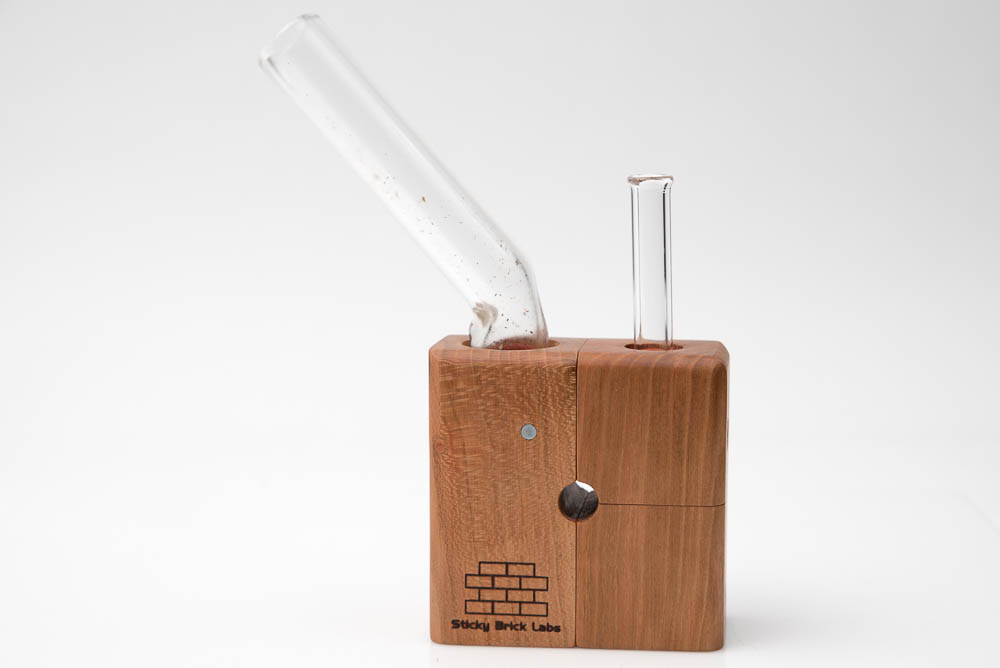 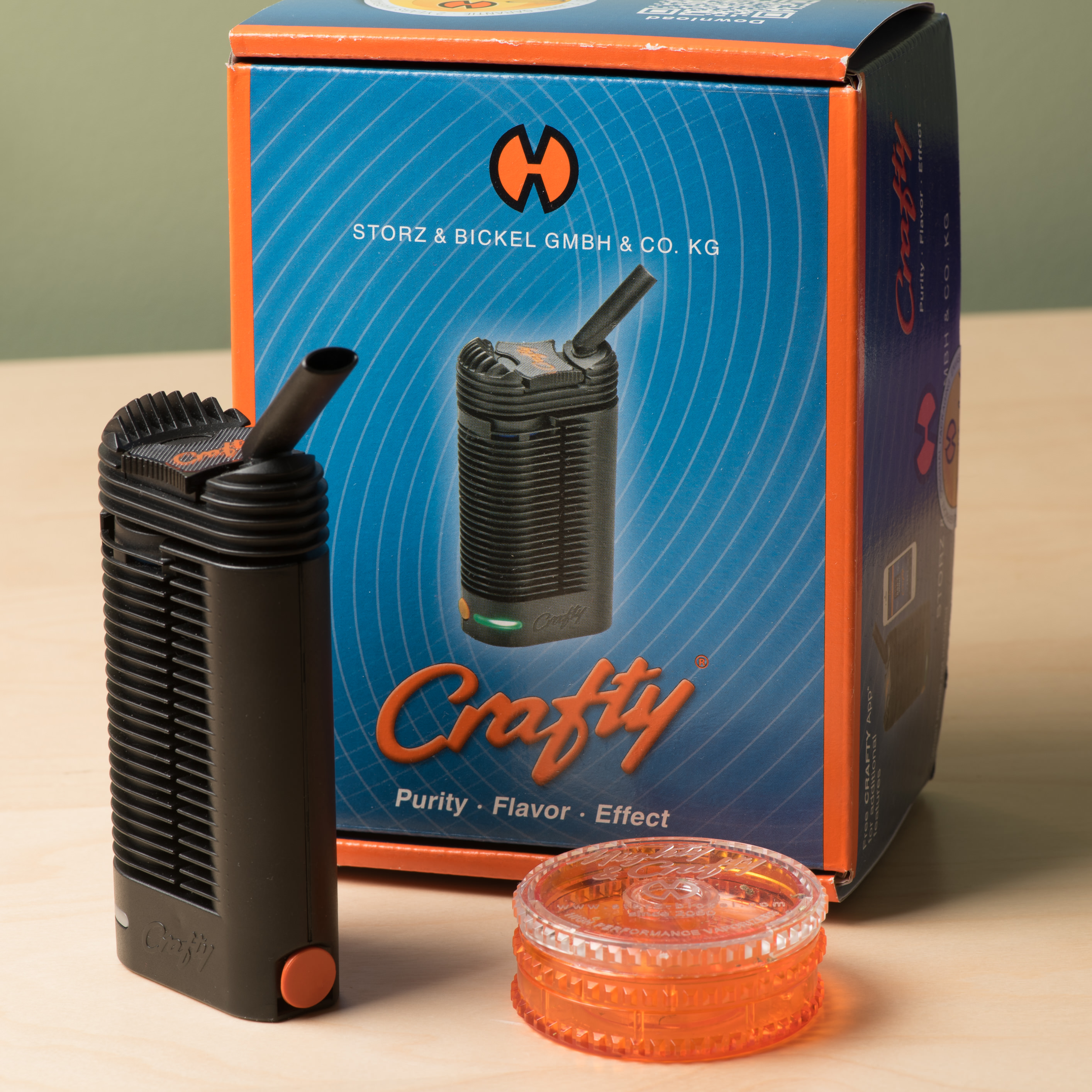 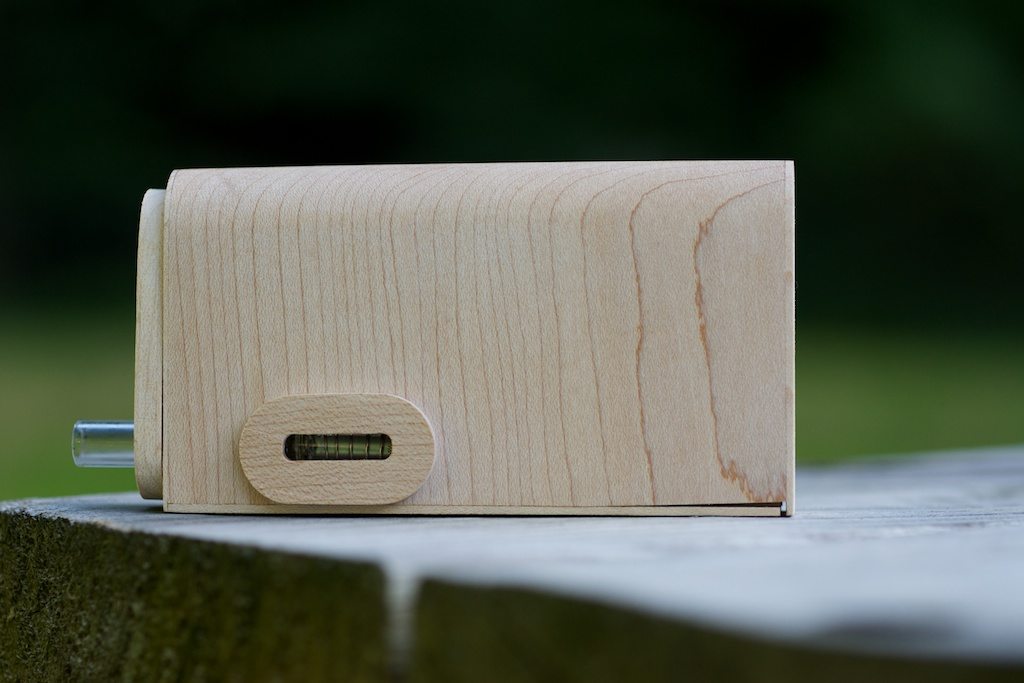